NAPLES, Fla. — Rose Marie Santangelo had weathered many hurricanes in her decades living near the water outside Naples, Fla. She thought she was prepared for Hurricane Ian, too.

But like so many other Floridians, Ms. Santangelo, 73, a beloved aunt who had retired from a career in radiation oncology, underestimated this storm.

"She really thought that it wouldn't hit here," Phyllis Santangelo, a niece, said. "And then when it did take a turn, I think she knew it was going to be bad."

Ian caused more deaths in Florida — at least 114 — than any hurricane in almost 90 years. Five other people died from the storm in North Carolina, as well as one in Virginia. Like Ms. Santangelo, residents became trapped in floodwaters inside their homes. Others stopped breathing when power outages left oxygen machines inoperable. Or they perished in cars as the storm surge rose.

But the storm's impact, while broadly felt, was not even.

Most of the victims were older adults. Two-thirds of them were 60 or older, and 30 were past their 80th birthdays.

The people who died were concentrated in exposed coastal areas and on barrier islands. Though deaths were reported in 21 counties, nearly half came from Lee County, in southwest Florida.

And a large number of victims — at least 58 — drowned, as Ian's size, relatively slow movement and massive storm surge multiplied its threat.

As residents sort through the wreckage in Florida, a look at who died and where revealed how an aging population on the coast proved especially vulnerable to Ian. In many cases, the people who died had pre-existing medical problems, waited too long to evacuate and were trapped by floodwaters. In some of the hardest-hit areas, evacuation orders that were delayed amid a shifting storm track added to the confusion. 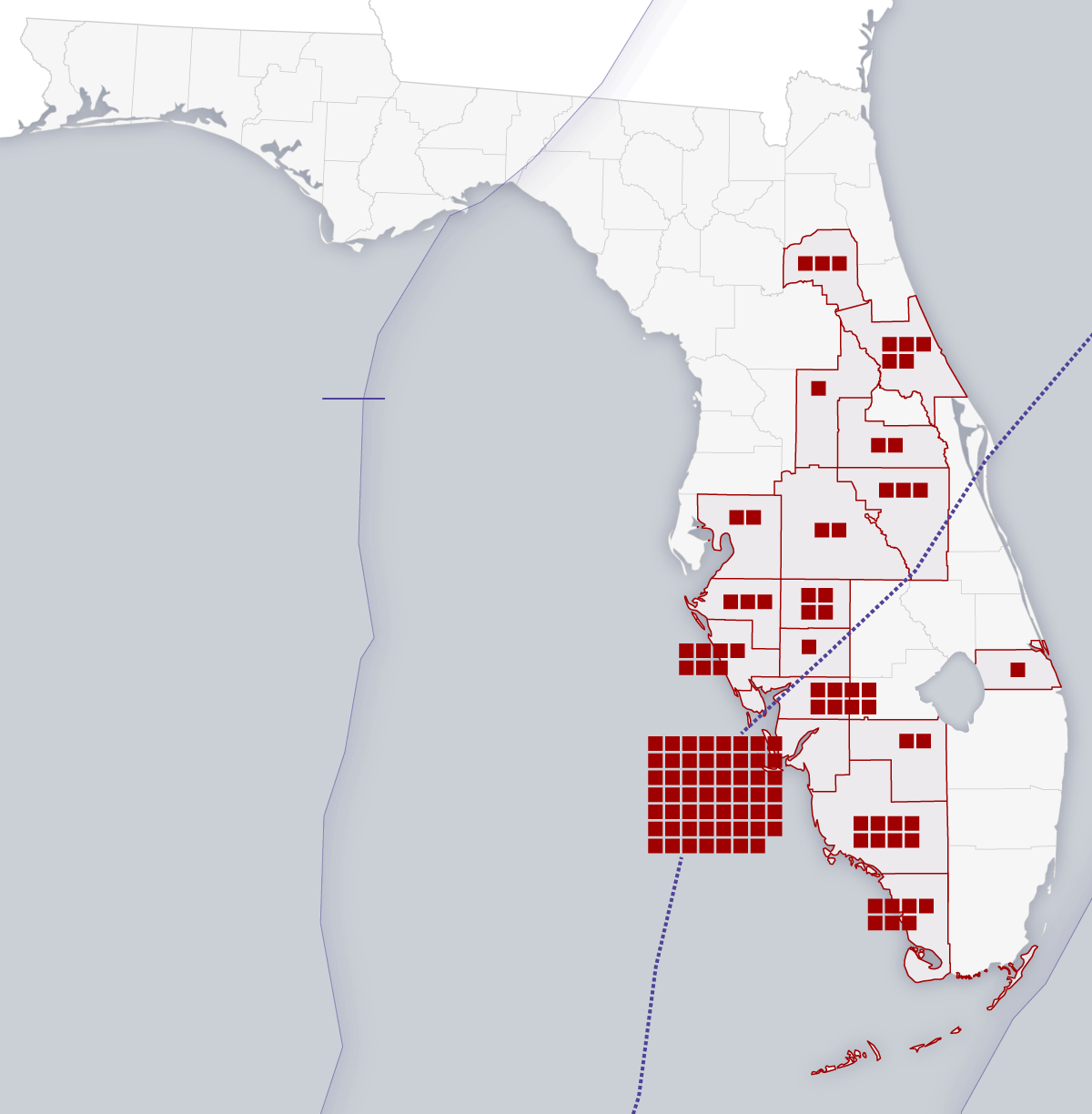 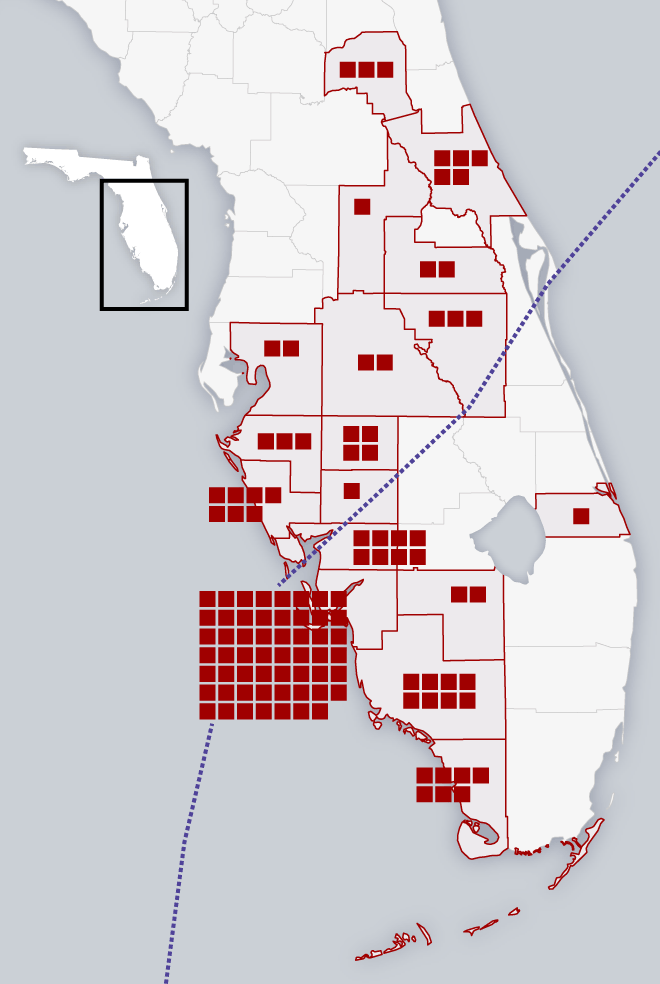 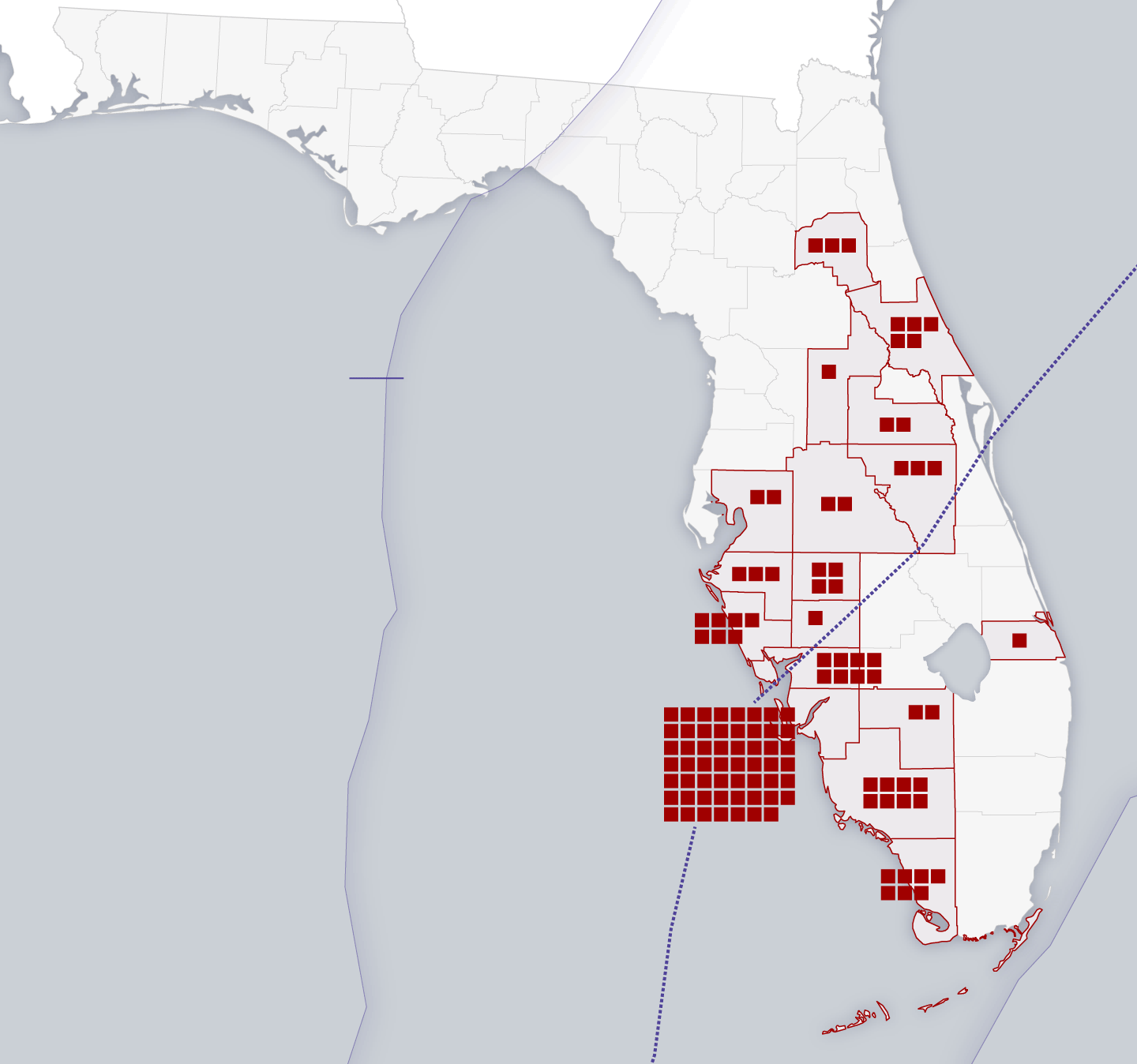 Many victims had significant medical problems.

As Hurricane Ian neared southwest Florida, Peggy Collson, 67, became increasingly worried about her ability to survive. She lived alone on the island community of Matlacha, in a modest one-story house along the water that had withstood previous hurricanes. But Ms. Collson, who received daily care from nurse's aides and could not walk without assistance, knew she would be at risk.

A few days before the hurricane, she tried to make arrangements to leave the island, said her brother Jim Collson, who lives in New York. But she ultimately decided to stay. The morning of the storm, Sept. 28, her fears magnified.

"She was so nervous she was sick to her stomach," he said.

Ms. Collson drowned. She was found floating in a canal a few blocks from her home.

Evacuating was especially challenging for many older Floridians with health problems, leaving them with limited options.

An 87-year-old man in Lee County who had health problems fell and struck his head twice. He did not seek care because of the storm and eventually died after falling asleep.

An 89-year-old man in Lee County died after his oxygen machine stopped working because of a power outage and generator failure.

An 82-year-old man in Lee County evacuated to safer ground but died because he left his prescription medications at home.

And there was Ms. Santangelo, who had a years-old back injury and often used a walker around her pink two-bedroom home.

As the hurricane approached, Ms. Santangelo was in touch with family members in her home state of Ohio. But by the afternoon of Sept. 28, she had stopped responding to their calls and text messages. When a neighbor stopped by to check on her the next day, a sheriff's incident report said, he found her dead on the kitchen floor. She had drowned.

Five of Ms. Santangelo's nieces and nephews came from Ohio to clear out the house. Ten days after the storm, they stood around her candlelit kitchen island, drinking their aunt's favorite Pinot Grigio. They planned to spread her ashes around her palm trees.

"She was loved so much," Phyllis Santangelo said. "She never had children; we were her kids."

Long waits for rescue were sometimes too long.

Around midday Sept. 29, Ms. Argo told dispatchers the water was up to her knees. Later, she told them her husband, Jerry W. Argo, 67, had fallen and hit his head. She kept calling. They told her they had a backlog of rescue calls and were waiting on specialized equipment to travel through the flood.

Lisa Mitchell, Ms. Argo's daughter, said Mr. Argo had fallen off a bar stool into the water. Ms. Argo tried propping his head up to keep him above the water. It wasn't enough.

By the time the Volusia County Sheriff's Office responded late that night, Mr. Argo was dead from drowning. He was one of several Floridians whom emergency crews were not able to reach in time.

A 72-year-old man in Hendry County complained of shortness of breath, but paramedics could not reach him because of the storm. He was later found unresponsive outside his home.

A 70-year-old woman in Lee County was found in floodwaters up to her chest and taken to the hospital hours later. She had a urinary tract infection, as well as other conditions, and later died. The medical response was delayed by the storm.

The sheriff's office in Volusia County said it was looking into whether it needed to acquire more vehicles capable of traveling in high waters.

Ms. Mitchell said she wished she could have helped, but she was also trapped: "My whole yard was flooded."

Ian's death toll was historic, but exact data can be fuzzy.

On Oct. 1, in the immediate aftermath of Ian's brutal impact on southwest Florida, a spokeswoman for the Charlotte County Sheriff's Office said in an email that "we currently have 23 deaths that are directly or indirectly related to the storm." She added that the local medical examiner would later determine official causes of death. Two days later, she said the death toll in Charlotte County had risen to 24.

But as of this week, the medical examiner there had linked only eight of those deaths to Hurricane Ian, deciding that most of the rest were not caused by the storm after all.

The difference in the numbers in Charlotte County underscores the subjective science of determining which deaths that occurred during the storm were caused by it, at least in part.

Some findings are obvious, like when a person drowns after their house floods during a hurricane. But some are less clear.

In other Florida counties, medical examiners added four suicides, a homicide, car crashes and several heart attacks to the state's official hurricane death toll, determining that circumstances caused by the storm contributed to the deaths.

A 73-year-old man in Lee County shot and killed himself after seeing property damage from the hurricane.

A 22-year-old woman in Manatee County died when she crashed her all-terrain vehicle after the road had been washed out.

A 29-year-old man in Hendry County was shot dead by another person after an argument. The victim was a contractor who had been sent to the area to help with relief efforts.

The data in this article is based on official state totals, which are based on the judgment of local medical examiners. In articles published before the medical examiner in Charlotte County confirmed that the other deaths were not related to the storm, The New York Times relied on the Charlotte County data provided by the sheriff's office. Because of the time it can take for medical examiners to conduct autopsies and report their findings, news agencies often rely on preliminary reports from law enforcement to determine the toll of a hurricane.

It is relatively common for death counts to change: In Lee County, the medical examiner decided that six deaths reported by the sheriff were not connected to Ian. Some Florida counties continued to add deaths this week, meaning the current count may not be final.

Not long after Ian made landfall, Craig Steven Markgraff Jr., who went by CJ, called his brother for help.

"I explained to him that I was already in the thick of it," said the brother, Brett Markgraff, who was hunkered down in another town with his son.

CJ, his father and a friend tried to ride out the storm near Zolfo Springs, a small town nearly an hour's drive from the Gulf Coast. But being inland was no defense from the huge amounts of rain and flooding the storm brought.

As conditions improved on the morning of Sept. 29, Brett Markgraff set out for his brother's home, but the road where his brother lived was underwater. CJ had stopped responding to messages, so Brett Markgraff tried to take a canoe to the house. He was stopped by state officials who had blocked off the area.

Later, rescue crews saved CJ's father and friend, who were found clinging to trees. But there was no sign of CJ, who was last seen struggling to stay above water as a current swept him away. He was one of many Floridians who died far from the coast.

A 38-year-old man died in Lake County, in the middle of the state, when his vehicle hydroplaned and crashed.

An 85-year-old man in Putnam County, in northeast Florida, fell off a ladder and died while putting a tarp on his roof.

A 75-year-old man in Orange County, in the Orlando area, was trimming branches that were damaged in the storm when he fell off a ladder and died.

Brett Markgraff said rescuers told him they looked for CJ, 35, but after about an hour, they needed to move on.

"I was left dumbfounded and helpless," Mr. Markgraff said.

A few days later, a detective called their father and said that CJ's body had been found and identified by his tattoos.

Some left home, then became trapped.

Ian Conway, 61, a retired pilot, lived in a tan one-bedroom house in a mobile home community in Estero, on the banks of the Estero River. Living in a flood-prone area, he had always assured Margot Conway, one of his two daughters, that he would go to a shelter if a serious hurricane came through.

The morning that Hurricane Ian hit, he sent an email to his siblings saying that he was headed to a shelter, Ms. Conway said. But he never made it there.

Just before 7 a.m. the following morning, a neighbor called Ms. Conway in Washington State. Her father had been found dead from drowning, draped over a bench at the shuffleboard court across the street from his home.

Mr. Conway's death was one of several in which people left home, either to seek shelter, make final preparations or assess damage, only to wind up becoming victims.

A 63-year-old woman in Collier County slipped and fell in a puddle while evacuating her home. Within an hour, she was unresponsive.

A 72-year-old man in Volusia County was draining water from his pool into a canal as the storm was bearing down. He was found dead in the canal.

This past summer, Mr. Conway's health had worsened. Ms. Conway, an emergency room nurse, had urged her father to go into assisted living, but he wanted to live on his own.

Ten days after the hurricane, Ms. Conway spent a quiet moment at the funeral home with her father's remains, playing his favorite song by the Smiths.

Vulnerable and Trapped: A Look at Those Lost in Hurricane Ian have 2564 words, post on www.nytimes.com at October 21, 2022. This is cached page on Law Breaking News. If you want remove this page, please contact us.