Welcome to the last news digest of this week. Read the news from August 5, 2022 in less than five minutes.

The US Senate confirmed the nomination of Gautam Rana as ambassador to Slovakia on August 4.

Rana, a career diplomat of Indian-American descent, will come to Slovakia from Algeria, where he has served at the US embassy there since 2020, most recently as its deputy chief of mission. He previously served at the embassies in Slovenia and India, and has worked in Iraq, Pakistan, Afghanistan and the United Arab Emirates.

Gautam Rana will take up a post that has been vacant since May, when his predecessor Bridget Brink moved on to serve as the US Ambassador in Kyiv .

Slovakia is drinking less beer since the pandemic

The average inhabitant of Slovakia drank approximately 120 large beers (equivalent to 106 pints), or 60.2 litres of beer last year. The figure marks a 30-year low: per capita consumption was 90 litres in 1990.

The inhabitants of Slovakia do not drink even half the amount of beer that their former compatriots in the Czech Republic do: average consumption there was 135 litres per capita in 2020.

Take a look at our tips for outings and good reads . This week, Peter Dlhopolec writes about a display on 11 amazing women, a historical gay love story, and a trip to an overlooked plateau. If you haven’t done so yet, sign up for his Spectacular Slovakia newsletter .

If a person whose job it is to think can tie himself into a mental pretzel over someone as inoffensive as President Čaputová or something as morally unambiguous as the defence of Ukraine, what hope for the rest of us?

In his latest Nice Driveway! column, James Thomson offers an answer to this (and other) questions. 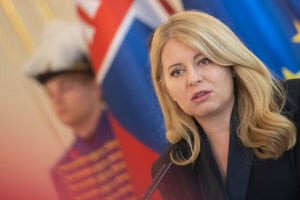 Related article Why would you hate President Čaputová? Read more

REFUGEES : More than 10,000 people have asked the International Organisation for Migration (IOM) in Slovakia for assistance since the Russian invasion of Ukraine in February this year. People fleeing the war most frequently ask whether they will lose their temporary protection status if they visit relatives in Ukraine.

CORONAVIRUS : Out of the 1,881 samples that laboratories tested yesterday, 947 were positive. Six more people died of Covid, taking the count of Covid victims in Slovakia to 20,248 as of August 5. There are currently 638 people with Covid in Slovak hospitals. (NCZI)

COALITION: After Za Ľudí MP Jana Žitňanská suggested there could be something like an “opposition agreement” with SaS, in which the party would pledge not to vote out the government even while in opposition, SaS leader Richard Sulík said SaS was not planning to sign any such agreement. OĽaNO leader Igor Matovič wrote a Facebook post accusing Sulík of being a “professional manipulator and liar”, and added that “I do not hate you, only pity you”.

MONKEY POX: Slovakia reported two new monkey pox cases; a total of eight people have been diagnosed with the illness so far. The new patients are in the 20-59 age range and are isolating at home. There is no known epidemiological connection between them. (NCZI)

TB CASES DOWN : In 2021, Slovakia reported the lowest number of tuberculosis cases in the last 12 years: there were 137 cases altogether in the National Tuberculosis Register, which is 376 fewer than in 2009 and 21 fewer than in 2020. Vaccination against tuberculosis has not been compulsory in Slovakia since 2012. (NCZI)

TRANSFORMING TRANSPORT: The European Commission approved Slovakia’s scheme to support changes in transport. Slovakia will thus be able to use €30 million within the Recovery and Resilience Facility to transform solely road transport into combined road-rail-water transport by December 31, 2027. (TASR)

HEN NIGHT: About 50 crates containing live hens fell out of a Polish truck on the D1 highway last night. Some 400 birds were left running up and down an 80-metre strip of the highway. Highway police from Trnava helped round up the birds.

If you have suggestions on how this news overview can be improved, you can reach us at [email protected]

News digest: New US ambassador confirmed have 1221 words, post on spectator.sme.sk at August 5, 2022. This is cached page on Law Breaking News. If you want remove this page, please contact us.