Nearly one-third of Koreans lost income in the coronavirus pandemic, while one out of eight in their 40s and 50s borrowed money to make ends meet, a poll suggests.
The findings were released on Sunday by the Korea Institute for Health and Social Affairs based on a survey of 3,923 people between June and September last year.
Some 31.4 percent of respondents said they suffered a decline in their income since the pandemic started. Among self-employed people the figure was a whopping 76.6 percent and among temporary and day laborers 49 percent.
Those at the bottom end of the income pyramid and in rural areas were also hit hard with 43.2 percent and 37.9 percent.
Some 8.5 percent of respondents had borrowed money from financial institutions or friends due to financial difficulties since the pandemic began, and 12.5 percent of them were in their 40s and 11.5 percent in their 50s.
By profession, 17.7 percent were self-employed, 14.5 percent were day laborers and 10.6 percent were temporary workers, while only five percent were permanently employed.
Some 8.4 percent said they cleared out their savings accounts or cashed in insurance policies due to financial difficulties, especially among those in their 40s and 50s and self-employed and temporary workers.
Respondents’ quality of life scored just 5.9 points out of maximum 10, down from 2019 before the pandemic and the first time the score fell below six percent, while depression levels stood at 2.93 points, up from 2.71 points in 2019. 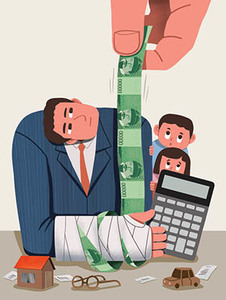 Billionaires on the Rise

Gap Between Rich and Poor Widens

Half a Million More Sink Below Poverty Line Under Moon

3 in 10 Rich Koreans Prefer to Invest in Real Estate

1/3 of Koreans Lost Income in Pandemic have 562 words, post on english.chosun.com at August 10, 2022. This is cached page on Law Breaking News. If you want remove this page, please contact us.