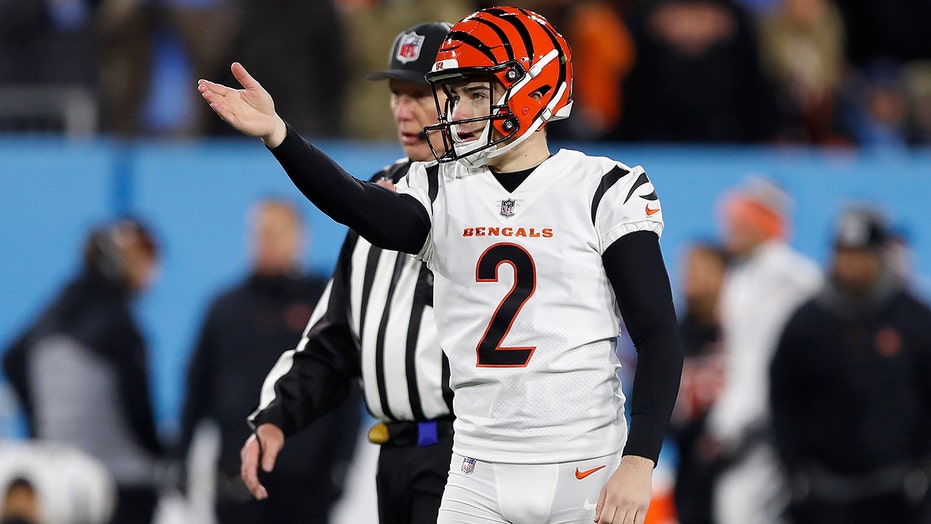 Evan McPherson etched his name in Cincinnati Bengals lore when he nailed a 52-yard field goal as time expired to help the team defeat the Tennessee Titans in the AFC divisional round over the weekend.

Bengals quarterback Joe Burrow mentioned in the postgame press conference that he overheard McPherson telling backup quarterback Brandon Allen “looks like we're going to the AFC Championship” after warming up for a few moments before the game-winning kick.

Kicker Evan McPherson celebrates his game-winning kick with holder Kevin Huber during the Cincinnati Bengals’ 19-16 win over the Tennessee Titans in the AFC Divisional Playoff game at Nissan Stadium on Jan. 22, 2022, in Nashville. (Wesley Hitt/Getty Images)

Sure enough, McPherson nailed the kick and sent Cincinnati to its first conference championship game since the 1988 season.

McPherson appeared on Fox News Channel's “America's Newsroom” and was asked by co-anchor Bill Hemmer whether he gave the iconic quote to Allen.

“I did,” McPherson said. “I'll tell you the reason I kinda said it. How I explain it is I feel like, kinda saying something like that, you gotta back it up and so after saying that there's kinda no other option but to go out there and make it.”

McPherson agreed with the notion that his remark was comparable to Babe Ruth calling his home-run shot.

BENGALS’ JOE BURROW SAYS HE IS ‘TIRED OF THE UNDERDOG NARRATIVE’

Dana Perino asked McPherson how the community has reacted to the Bengals' success. McPherson said he used to be able to go into supermarkets and go relatively unnoticed. That's not the case anymore.

“The community is on fire. I love it. It started out with I could go to Target or go get my haircut and kinda go unnoticed,” he said. “Now it's funny now that we're kinda in the spotlight and winning games, more and more I got to Target and somebody is like 'Are you the Bengals kicker?' and I'm like 'Yeah, yeah.' It's pretty cool (to see) the presence we've made in the Cincinnati area and it's just so awesome. Like I said before, I'm just so happy to be a part of this team that's kinda bringing life to the city of Cincinnati. Hopefully, we keep winning and bring more life.”

Hemmer and Perino both noted that before this season, the Bengals hadn't won a playoff game since the 1991 season. Only seven Bengals were alive for that last playoff win.

Kicker Evan McPherson of the Cincinnati Bengals lines up his game-winning kick against the Tennessee Titans on Jan. 22, 2022, in Nashville. (Wesley Hitt/Getty Images)

“Like you said, I wasn't alive. My parents probably weren't even thinking about having me at that time. To be a part of it, it's pretty special,” he said.

The Bengals play the Kansas City Chiefs for the AFC title and the right to go to Super Bowl LVI in February.

Ryan Gaydos is the sports editor for Fox News and Fox Business. Story tips can be sent to [email protected]

Bengals' Evan McPherson confirms giving epic quote to backup QB, says Cincinnati is buzzing thanks to success have 706 words, post on www.foxnews.com at January 24, 2022. This is cached page on Law Breaking News. If you want remove this page, please contact us.