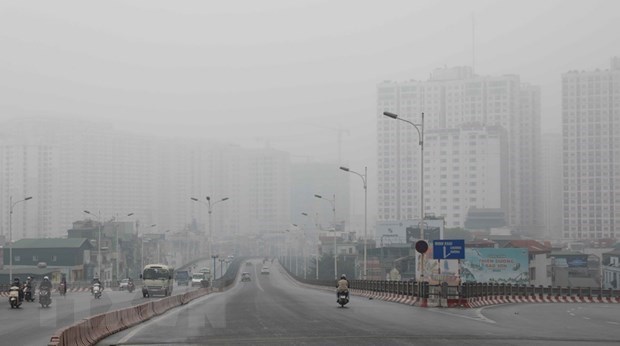 Air quality in the capital city of Hanoi fell to dangerous levels in the first week of the New Year. (Photo: VNA)

Hanoi (VNA) – How to improve air quality was the main topic of a seminar held in Hanoi on January 9 within the framework of a clean air project supported by the United States Agency for International Development (USAID).

Air quality in the capital city of Hanoi fell to dangerous levels in the first week of the New Year, particularly in inner city areas, according to the Department of Natural Resurces and Environment.

The air quality index (AQI) figures have been reported to the municipal People’s Committee who are working with relevant agencies to identify the causes of the pollution and for measures to improve air quality.

Results from 35 air quality monitoring stations in the city showed that the AQI tended to increase from January 1, and rose sharply up on the morning of January 5, hit the peak warning level of 5/6.

From December 29 to December 31, 2020, most of the stations showed that the AQI was good or medium level.

However, from January 1, 2021, the air quality tended to drop sharply, some locations including the Environmental Protection Department, the People’s Committee of Minh Khai Ward, and the French Embassy.

According to the city’s Department of Natural Resources and Environment, this is due to the intensification of the northeast monsoon, influence of cold air with strong winds which promoted a diffusion of pollutants, so the air quality was kept at good and medium levels in period from December 29 to 31, 2020.

However, when the cold air decreased with low wind speeds and the temperature dropped at night, dense fog formed, hindering the diffusion of pollution, causing pollution.

Additionally, the pollutants caused by traffic, construction and industrial production in the inner city, and neighbouring provinces accumulated.

The increases of traffic activities after the New Year holiday, of garbage stagnation, spontaneous burning of waste causing environmental pollution, year-end production to supply goods during the Lunar New Year, were also listed as causes of pollution emissions./.

Seminar seeks ways to improve air quality have 642 words, post on en.vietnamplus.vn at January 10, 2021. This is cached page on Law Breaking News. If you want remove this page, please contact us.