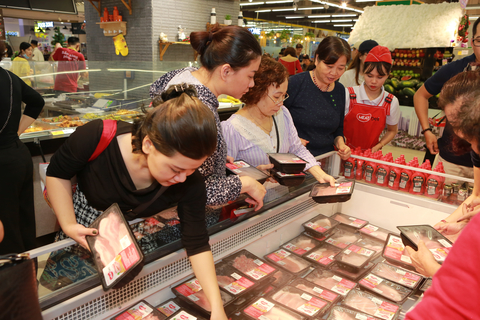 Masan MEATLife, a subsidiary of Masan Group, has set itself an ambitious medium-term revenue target from branded meat products of US$1 billion and for it to account for 50 per cent of total revenues.

MEATDeli products have been bought so far by more than 800,000 customers.

With its launch in HCM City on September 27 MEATDeli has more than 270 stores and agents in the city and Ha Noi, and is also sold at supermarket chains such as VinMart, CoopMart and CoopXtra.

According to a Nielsen survey, 97 per cent of consumers are satisfied with MEATDeli pork, and called it “delicious.”

It is the only branded meat product in Viet Nam that meets the Global Standard for Food Safety established by the British Retailer Consortium.

The product also adopts a strict quarantine control system under the guidance of the Ministry of Agriculture and Rural Development and Ministry of Health’s Food Safety Department.

MEATLife’s shares will list in the stock market in 2019.

Masan Group (MSN) also targets getting all its subsidiaries listed by 2023 to maximise its shareholders’ benefits.

MSN has sold 1.8 million Masan MEATLife (MML) shares to investors for VND135 billion (US$5.82 million) but retains nearly 80 per cent of the company’s shares.

The investors include Viet Capital Securities, HCM City Securities and MB Securities. This is a strategic step in enabling the meat business to list on the Unlisted Public Company Market (UpCoM) by the end of this year.

In addition to promoting transparency for shareholders, the UpCoM listing will also facilitate an initial public offering on the HCM City bourse in 2022-23.

Yew Kean Lai, a director of Masan MEATLife and a major shareholder, has completed the sale of nearly 17.8 million shares. He is also set to resign from the board of directors.

Masan MEATlife is seeking the opinion of shareholders in writing about Masan Vision Co., Ltd. buying 17 per cent of the total voting shares of the company without making a public bid.

It also consulted shareholders about issuing 9.99 per cent of the total outstanding shares of the company at a price of over VND90,000 per share.

According to Masan Group, the listing of its subsidiary is aimed at increasing the group’s strategic flexibility and better communicating its track record to the public.

Starting out as the country’s leading animal feed company with BioZeem, a leading brand, Masan MEATLife has shifted its focus to the branded meat business as consumer goods.

With its motto “MEATLife for a better life”, Masan MEATLife is committed to bringing fresh, safe and reasonably priced meat products to millions of families, fulfilling its mission to improve the quality of nutrition for a better life.

Masan MEATLife targets $1 billion sales for branded meat products have 764 words, post on bizhub.vn at October 17, 2019. This is cached page on Law Breaking News. If you want remove this page, please contact us.