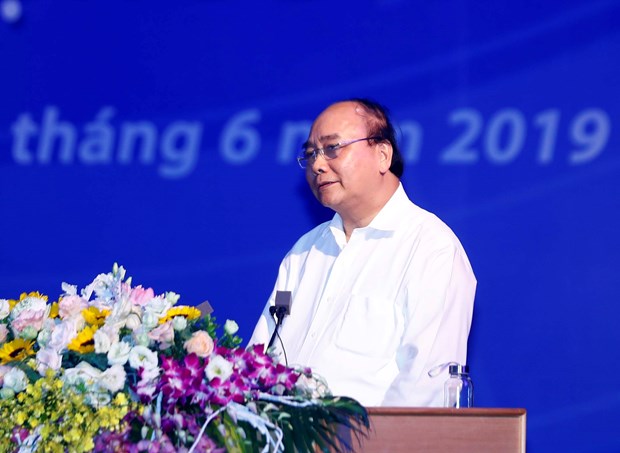 
Hung Yen (VNA) – The northern key economic region has advantages over other regions in the country to develop, especially in terms of infrastructure and human resources , Prime Minister Nguyen Xuan Phuc said at a conference held in the northern province of Hung Yen on June 25.

The Government leader highlighted the region's strategic importance in terms of politics, society-economy, and defence-security, adding that it is the second biggest economic region nationwide and the only region where all localities contribute to the central budget.

The region has nearly 80 percent of communes recognised as new rural areas and the lowest rate of poor households – 2 percent, Phuc said.

The PM pointed to shortcomings in the region such as unsustainable growth of the service sector, which is the region's strong point but its proportion in the economic structure is declining; small-scale agricultural production with out-of-date cultivation techniques and processing technology; weak connection in production and business; and environmental pollution in urban and rural areas, river basins, trade villages, and industrial clusters.

Most of foreign direct investment (FDI) projects focus on sectors and industries subject to investment incentives and using low-cost labour. Industrial projects are mainly concentrated in Hanoi, Hai Phong and Bac Ninh such as Samsung, LG, Microsoft and Canon, and just stop at processing and assembling with low added value, the PM noted.

The region should maintain its role as the country's centre of politics, economy, culture and science-technology, and strive to become one of the nation's two biggest economic hubs besides the southern key economic region, he said.

The region must take the lead in science-technology and innovation as well as economic restructuring, the PM requested.

He also urged the region to push ahead with building rural areas and reforming administrative procedures, improving business environment, preventing corruption and wastefulness, and ensuring social safety for people.

Regional linkage was a focal point at the conference, with leaders of localities proposing several measures to promote regional connectivity.

Last year, its total GRDP made up about 31.73 percent of the country's GRDP, ranking second after the southern key economic region. The region contributed over 31 percent of the State budget's revenues and over 30 percent of national exports.

PM asks northern region to optimise advantages for stronger development have 764 words, post on en.vietnamplus.vn at June 25, 2019. This is cached page on Law Breaking News. If you want remove this page, please contact us.