COLUMBIA, S.C. — Dylann Roof spat on and burned the American flag, but waved the Confederate.

He posed for pictures wearing a No. 88 T-shirt, had 88 Facebook friends and wrote that number — white supremacist code for "Heil Hitler"— in the South Carolina sand.

A website discovered Saturday appears to offer the first serious look at Mr. Roof's thinking, including how the case of Trayvon Martin, the black Florida teenager shot to death in 2012 by George Zimmerman, a neighborhood watch volunteer, triggered his racist rage. The site shows a stash of 60 photographs, many of them of Mr. Roof at Confederate heritage sites or slavery museums, and includes a nearly 2,500-word manifesto in which the author criticized blacks as being inferior while lamenting the cowardice of white flight.

"I have no choice," it reads. "I am not in the position to, alone, go into the ghetto and fight. I chose Charleston because it is most historic city in my state, and at one time had the highest ratio of blacks to Whites in the country. We have no skinheads, no real KKK, no one doing anything but talking on the internet. Well someone has to have the bravery to take it to the real world, and I guess that has to be me."

The website was first registered on Feb. 9 in the name of Dylann Roof, the 21-year-old man charged with entering the historically black Emanuel A.M.E. Church in Charleston on Wednesday night, attending a prayer meeting for an hour and then murdering nine parishioners. The day after the site was registered, the registration information was intentionally masked.

It is not clear whether the manifesto was written by Mr. Roof or if he had control of it. Nor is it clear whether he took the pictures with a timer, or if someone else took them. In a joint statement Saturday night, the Charleston Police Department and the F.B.I. said they were aware of the website and were "taking steps to verify the authenticity of these postings."

If it is genuine, as his friends seem to think, the tourist sites he visited, the pictures that were posted and the hate-filled words on the site offered a chilling glimpse into the interests of an unemployed former landscaper said to have a fixation on race.

"This whole racist thing came into him within the past five years," said Caleb Brown, a childhood friend of Mr. Roof's who is half black. "He was never really popular; he accepted that. He wasn't like: 'When I grow up I am going to show all these kids.' He accepted who he was, and who he was changed, obviously."

Mr. Roof has been charged with nine counts of murder in the killings. Victims included the Rev. Clementa C. Pinckney, who was both the church pastor and a state senator.

Mr. Roof's friends say that he only spoke of his murderous plans once — when he recently warned that he planned to do something crazy with the gun he had purchased with the money he got from his parents for his 21st birthday. But they say his sense of racial grievance began with the Trayvon Martin case.

The website, the lastrhodesian.com, which was not working by Saturday afternoon, featured a photo of a bloodied dead white man on the floor. The picture appears to be an image from "Romper Stomper," an Australian movie about neo-Nazis. The domain name is a reference to the white minority of what is now Zimbabwe, where whites fought blacks for 15 years and enlisted white supremacists as mercenaries.

The site was first discovered by a blogger who goes by the pen name Emma Quangel, who paid $49 for a reverse domain search that turned up the site.

According to web server logs, the manifesto was last modified at 4:44 p.m. Eastern time on Wednesday, the day of the Charleston shootings, and the essay notes, "at the time of writing I am in a great hurry." 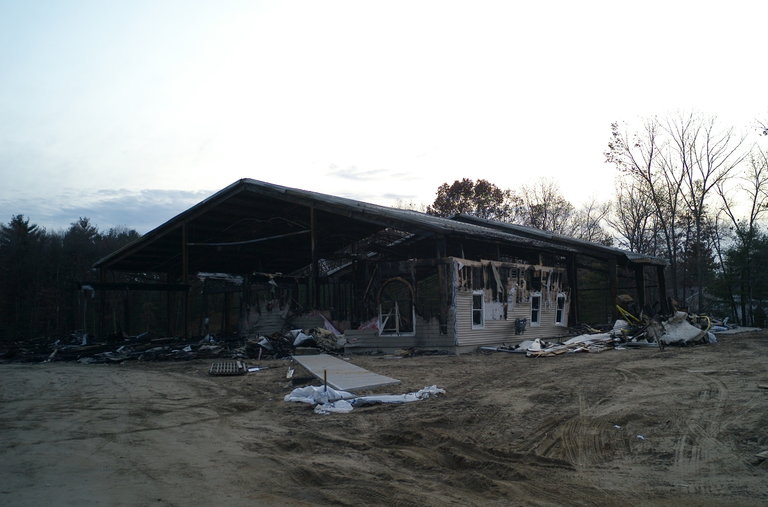 The killing of nine people at the Emanuel African Methodist Episcopal Church in Charleston, S.C., is among a long list of attacks targeting predominantly black churches in the United States.

In the manifesto, Mr. Roof writes: "The event that truly awakened me was the Trayvon Martin case. I kept hearing and seeing his name, and eventually I decided to look him up. I read the Wikipedia article and right away I was unable to understand what the big deal was. It was obvious that Zimmerman was in the right. But more importantly this prompted me to type in the words 'black on White crime' into Google, and I have never been the same since that day."

The manifesto also says he learned from the website of the far-right Council of Conservative Citizens. The council is an offshoot of a 1950s-era organization that fought school desegregation. A message on its website says the group is "deeply saddened by the Charleston killing spree."

A friend of Mr. Roof's, Jacob Meek, 15, said the references to the Trayvon Martin case made it clear that Mr. Roof had written the essay. "That's his website," he said. "He wrote it, and I just can tell."

Watchdog groups that track right-wing extremism say the manifesto reflects the language found in white supremacist forums online and dovetails with what has been said about Mr. Roof thus far — that he had self-radicalized, and that he did not belong to a particular hate group. "It's clear that he was extremely receptive to those ideas," said Mark Pitcavage, the director of the Anti-Defamation League's Center on Extremism. "At the same time, he does not have a sophisticated knowledge of white supremacy."

The icon for the browser tab on Mr. Roof's website is an Othala rune, an ancient symbol appropriated by the Nazis that remains common among neo-Nazi groups.

Mr. Roof was the latest in what watchdog groups say is a growing group of lone-wolf extremists. According to a study released in February by the Southern Poverty Law Center, about 70 percent of the 60 recent domestic terrorism attacks reviewed were conducted by people acting alone.

The writings on Mr. Roof's website show a fixation with black-on-white crime, which is common on white supremacy sites, said Heidi Beirich, the director of the Southern Poverty Law Center's Intelligence Project.

"They demonize blacks to position themselves as victims, and offer that as proof of why they need their own state," she said.

In one photograph posted on the website, Mr. Roof is shown posing with wax figures of slaves. In others, he posed with a handgun that appears to be a .45-caliber Glock. He had a .45-caliber Glock in his car when he was arrested Thursday, the police said.

The website's links contain several passages of long racist rants, in which he said Hispanics are enemies, and "Negroes" have lower I.Q.s and low impulse control. The manifesto praises segregation and says the author's reading of "hundreds" of slave narratives indicates that almost all slaves gave positive accounts of their lives. The manifesto uses defamatory terms for blacks, whom he accused of being "stupid and violent" with "the capacity to be very slick." It laments white flight, and suggested that the whites should instead stay behind in cities and fight.

Criticisms are also levied at Jews, but Asians are praised for being racists and potential allies. Mr. Brown said his friend's transformation appeared to have occurred after he left Columbia, S.C., for nearby Lexington. Records show he switched schools in 2007. "He wasn't putting on Facebook 'I hate black people. I am going to shoot up a church,' " Mr. Brown said.

Dylann Roof Photos and a Manifesto Are Posted on Website have 1558 words, post on www.nytimes.com at June 20, 2015. This is cached page on Law Breaking News. If you want remove this page, please contact us.